Designed for senior high school aged flutists, this dynamic and acclaimed program focuses on strengthening artistry, musicianship and fundamental flute technique. Students participate in daily private lessons, master classes, and workshops with professors from the University of Illinois, DePaul University, and Eastern Illinois University, among others. The camp offers an in-depth experience covering a range of topics, including advice on preparing for college auditions, ensemble etiquette, daily warm-ups  and more. Activities and classes in the pre-college program are designed to immerse students in a college music experience similar to that of a music student at the University of Illinois. 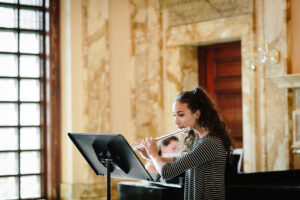 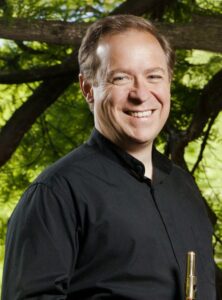 Jonathan Keeble is known for his rich tone, effervescent personality, and nuanced musicality. In high demand as performing artist and master class clinician, he has been described as having an “infinitely flexible sound, with many subtle colors,” and is among the leading performers of his generation. Recently released, critically acclaimed recordings include Voyage and Song of the Black Swan as part of the Aletheia Duo, and Turbulent Winds with the Prairie Winds. He is a regular performer at National Flute Association conventions, and is currently Immediate Past President of the Association.

Flutist Rebecca Johnson has been on the faculty of Eastern Illinois University since 2007, and is 2nd flutist of the orchestra Sinfonia da Camera. Dr. Johnson enjoys national prominence as performer and teacher through her work on numerous guest artist recital series, master classes, festivals and orchestras. Internationally, she has regularly performed and taught at the Convención Internacionál de las Flautistas in Quito, Ecuador, since 2009, and was a featured artist at the 2018 Festival Internacional de Flautistas in São Paulo, Brazil. Recent projects include a recording of Thea Musgrave’s music with oboist Elizabeth Sullivan and many regional and national conference presentations, mostly focusing on works by female composers.

A native of San Diego, California, flutist Jenny Shin is a performer, educator, chamber ensemble coach and wind pedagogy instructor. She is an avid solo recitalist in Chicago. As an orchestral musician, she shared stages with prestigious ensembles such as the Lyric Opera of Chicago, Champaign-Urbana Symphony Orchestra, Sinfonia da Camera and the San Antonio Symphony.

In addition to her performing, Ms. Shin is a passionate teacher. She has been a part of the faculty with the Illinois Summer Youth Music Pre-College Flute Camp since 2014 and has served as teaching assistant at both the University of Illinois and Northwestern University during her studies.

Ms. Shin is a frequent adjudicator and clinician. She has been on the adjudicating panel for the Chicago Flute Club, various Chicago area concerto competitions as well as the Music Teacher’s National Association. She serves as the international liaison for the National Flute Association and is a Yamaha Performing Artist.