The Composition program was created to give any high school music students with an interest in composition an opportunity to explore and develop new skills. There will be individual composition lessons, master classes, and workshops on electronic music techniques, including notation, digital audio, and sound reinforcement.

Preparation: Participants will be asked to begin composing a piece for string quartet before the program begins (two violins, viola and cello). Your piece will be workshopped, completed and performed by a string quartet during ISYM. You do not need to finish before the first day, but you should at least have a starting point. And if you do have one piece already done, then you can probably write a second piece during the week.

Born in San Juan, Puerto Rico, Composer Carlos R. Carrillo holds degrees from the Eastman School of Music (BM), Yale University (MM) and the University of Pennsylvania (PhD). His teachers have included Tania León, Joseph Schwantner, Christopher Rouse, Jacob Druckman, Martin Bresnick, Roberto Sierra, George Crumb, James Primosch, Jay Reise and Steve Mackey. Mr. Carrillo is the recipient of numerous awards including the Bearns Prize, the Charles Ives Scholarship from the American Academy of Arts and Letters, BMI and ASCAP awards. He has been commissioned by Music and the Anthology for the Da Capo Chamber Players, the New York Youth Symphony, Concert Artists Guild and the Pennsylvania Music Teachers Association. In 2004 he received a commission from the American Composers Orchestra, the second such work commissioned for ACO by the BMI Foundation, Inc./ Carlos Surinach Fund. Dr. Carrillo’s music has been performed at the American Composers Orchestra’s Sonido de las Americas Festival and the Casals Festival, and by Young Musician Foundation’s Debut Orchestra, Sequitur, Network for New Music, Prism Quartet, Puerto Rico Symphony Orchestra, New York Youth Symphony, and members of the New Jersey Symphony Orchestra. In 2002, his symphonic work Cantares was featured at the inaugural “Synergy: Composer and Conductor” program presented by the Los Angeles Philharmonic and American Symphony Orchestra League. In 1998 he received one of the first Aaron Copland Awards from the Copland Heritage Association and he was the 2001-2003 Van Lier Emerging Composer Fellow with the ACO. In the spring of 2005 Dr. Carrillo was invited to the inaugural John Duffy Composers Institute as part of the 9th Annual Virginia Arts Festival. In 2007 he received a fellowship from the Civitella Ranieri Foundation. From 2007 to 2009 Dr. Carrillo was musical director of the Wabash Valley Youth Symphony. He has taught composition at DePauw University, Reed College, and the Conservatory of Music in San Juan, Puerto Rico. In the Spring of 2013 Dr. Carrillo was appointed Assistant Professor of Composition-Theory at the University of Illinois at Urbana-Champaign. 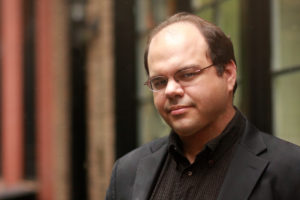 Born in 1973 in Santurce, Puerto Rico to Cuban parents, composer Armando Bayolo began musical studies at the age of twelve.  At sixteen he went on to study at the prestigious Interlochen Arts Academy in Interlochen, Michigan, where he first began the serious study of composition.  He holds degrees from the Eastman School of Music (B.M. 1995), where his teachers were Samuel Adler, Joseph Schwantner and Christopher Rouse; Yale University (M.M. 1997), where he studied with Roberto Sierra, Jacob Druckman, Ingram Marshall and Martin Bresnick; and the University of Michigan (D.M.A. 2001) where he studied with Michael Daugherty, Bright Sheng and Evan Chambers. Mr. Bayolo has been hailed for his “suggestive aural imagination” (El Nuevo Día) in works that are “full of lush ideas and a kind of fierce grandeur, (unfolding) with subtle, driving power” (The Washington Post).  His “music combines the audacity of popular music, the verve-filled rhythmic language of Latin America, and the pugnacity of postmodern classicism into a heady, formidable concoction” (Sequenza21),  and “deserves to be heard many more times, and in many more places.  It is new, it is fresh, and it gets its message across” (The Charlotte Observer) “with quite a high degree of poetic expressiveness” (Music-Web International).

Mr. Bayolo’s music has been commissioned and performed throughout the world by some of today’s most important musicians and ensembles.  He is the recipient of important commissions and awards from the Aspen Music Festival,  Fromm Music Foundation at Harvard University, the Music Department of the National Gallery of Art, the Arts Councils of the states of Iowa and North Carolina, the Cintas Foundation, the Minnesota Orchestra and American Composers Forum, the Consortium for a Strong Minority Presence, the all-Virginia Intercollegiate Band, and the Festival Interamericano de las Artes. Besides being active as a composer, Mr. Bayolo is an “adventurous, imaginative and fiercely committed (The Washington Post) advocate for contemporary music in American culture through his activities as Artistic Director and conductor of Great Noise Ensemble (since 2005), curator of the New Music at the Atlas series for the Atlas Performing Arts Center in Washington (from 2011-14), and as a writer for such publications as Sequenza21 and NewMusicBox.  His cello concerto, Orfei Mors and the cantata, Kaddish:Passio:Rothko, were each nominated for the Pulitzer Prize in music. Recordings of his music can be heard on the Sono Luminus, Inova, New Focus and Great Noise labels and is published by his own imprint, Olibel Music and available through his web site, www.armandobayolo.com.

Recent collaborators of American composer, conductor, and pianist Jeremy Gill include conductors JoAnn Falletta, Stuart Malina, Steven Osgood, Gil Rose, and Jaap van Zweden; pianists Ching-Yun Hu, Orion Weiss, and Shai Wosner; the vocal sextet Variant 6, and the Grammy-winning Parker Quartet. Jeremy has written major works for flutist Mimi Stillman, oboist Erin Hannigan, clarinetist Chris Grymes, and pianist Peter Orth, and the Buffalo Philharmonic, Chautauqua Symphony, Dallas Symphony, Harrisburg Symphony, and New York Classical Players have each commissioned his compositions since 2015. Other commissions have come from the American Opera Project, Chamber Music America, Concert Artists Guild, the Kimmel Center for the Performing Arts, and the American Composers Forum. Jeremy has received major awards from the American Academy of Arts and Letters, ASCAP, BMI, and the League of American Orchestras. Despite the many challenges facing arts organizations world-wide during the Covid-19 pandemic, the 2020–21 season saw the world premiere of Jeremyʼs Quartet for Oboe and Strings by Dallas Symphony principal oboist Erin Hannigan and her DSO colleagues at the Meyerson Symphony Center in Dallas. Abroad, St. Gallen Symphony principal oboist Rosey Yiameos gave the world premiere of Epilogue, Jeremyʼs encore to/commentary on Richard Straussʼs oboe concerto, at the Tonhalle St. Gallen in Switzerland. Still to come this season: members of the Dallas Symphony will premiere Corvus Mythicus, commissioned by the DSO to celebrate the installation of Crow I by Arie van Selm at the Meyerson Symphony Center; and the Lowell Chamber Orchestra will premiere Jeremyʼs 2003 Dirge-Fantasy under the direction of Music Director Orlando Cela for an online audience. Recent premieres of Jeremyʼs music have included Concerto dʼavorio (2019) by pianists Orion Weiss and Shai Wosner with the Chautauqua Symphony under JoAnn Falletta; The Journey (2019) by Cypriot soprano Marianna Suri, South African bass-baritone Chuma Sijeqa, and the Citizens of the World Choir under Jeremyʼs direction at the Illuminate Rotherhithe migration festival in London; …and everywhere the sea (2017) by Chris Grymes and Jeremy at The REACH Opening Festival at the Kennedy Center for the Performing Arts; Ainulindalë (2018), a tone poem for large orchestra after Tolkien, by the Harrisburg Symphony Orchestra under Stuart Malina; Ladiesʼ Voices (2016), a setting of Gertrude Steinʼs play of the same name, by coloratura Chelsea Miller and the Chautauqua Symphony Orchestra; and Serenada Concertante (2013) by the Dallas Symphony Orchestra under then Music Director Jaap van Zweden, featuring DSO principal oboist Erin Hannigan.

Described as “vividly colored” (The New York Times), “replete with imaginative textures” (The Dallas Morning News), and “exhilarating” (The Philadelphia Inquirer), Jeremyʼs music has earned him residencies and fellowships with the Bogliasco Foundation (2017), Chautauqua Opera (2016), Copland House (2015), the American Opera Project (2013–14), and the MacDowell Colony (2013), as well as major grants from New Music USA (2017, 2015) and Chamber Music America (2011). In April 2019, National Sawdust presented a portrait concert of Jeremyʼs music, which was The New Yorkerʼs criticʼs pick of the week and performed to a capacity crowd. Born in Harrisburg, PA in 1975, Jeremy studied oboe, piano, and composition before entering the
Eastman School of Music. He received his PhD from the University of Pennsylvania in 2000, and studied internationally at the American Conservatory in Fontainebleau (1993) and the Czech-American Summer Music Institute (1999). His principal teachers include Samuel Adler, George Crumb, Robert Lau, Yinam Leef, David Liptak, James Primosch, Jay Reise, George Rochberg, Christopher Rouse, Joseph Schwantner, and Anna Weesner. He has served as the Composer in Residence with Chautauqua Opera, the Harrisburg Symphony Orchestra, and the Newburyport Chamber Music Festival. He edited A Dance of Polar Opposites, a theoretical-philosophical work written between 1955–2005 by George Rochberg, published by the University of Rochester Press in 2012.

Hailing from the four borders of the United States, the Solideo Quartet is a promising string quartet eager to explore music that has withstood time past and present. Just as each member comes from a different part of the nation, the quartet seeks to share that chamber music can bring people from diverse communities together into unity. The Solideo Quartet is the Graduate Quartet in Residence with admired mentors and internationally-acclaimed Jupiter Quartet. Members of Solideo have been soloists with the Granada Symphony, Rocky Ridge Young Artist Orchestra, and the Concord Chamber Orchestra, in addition to performances with members of the Santa Barbara and Milwaukee Symphony Orchestras. Recently established in 2019, the Solideo Quartet has worked closely with Charles Castleman, David Ehrlich, Tom Landschoot, and Csaba Erdélyi. They have received masterclasses with artists from the Pacifica, Vermeer, and Concord Quartets. This spring, they have been selected as finalists in both the Coltman Chamber Competition and in the chamber division of the American Prize. Looking ahead in 2021, Solideo will offer its Midwestern debut with countertenor Reggie Mobley at the Carthage College Fine Arts Series. In August they will appear as the Emerging String Quartet in Residence for Community Engagement at the Music in the Vineyards Festival in Napa Valley. As their first year of residency begins in fall 2021, the Solideo Quartet looks forward to delving deeper into both new and traditional string quartet repertoire and supporting the works of contemporary composers by bringing music to diverse communities.